In 1985, Oprah made her acting debut as Sofia in Steven Spielberg’s adaptation of Alice Walker’s novel The Color Purple—and earned an Academy Award nomination. Oprah said she felt “deep down joy” while filming The Color Purple. “Being in that movie changed everything for me. I was doing work that I loved, and I was surrounded by others who were equally passionate. I was so happy every day,” she said.

Oprah is returning to the story in a new role as one of the producers, joining forces with Spielberg, Quincy Jones, and Scott Sanders, producer of the Broadway musical. Oprah will help bring The Color Purple musical—which first premiered on Broadway in 2005—to the screen. “To reinvent the movie at this time is to reinvent a phenomenon,” says Oprah.

The cast includes a wealth of talented actors and singers, from Taraji P. Henson to H.E.R. to Halle Bailey. Shortly after the film began shooting in March 2022, Oscar-nominated actress Aunjanue Ellis was announced as an addition to the cast. This news came on the heels of another piece—Ciara, Tamela Mann, and Louis Gossett Jr., among others, joined the cast as well. After that announcement, Ciara shared her thoughts on Twitter, saying, “Honored to be part of this beautiful ensemble and historic film.”

Oprah calls Alice Walker’s seminal novel, first published in 1983, one of the “national anthems for women’s empowerment.” Celie, the protagonist of The Color Purple, endures the unimaginable while growing up in rural Georgia—and triumphs, thanks in part to the support of the book’s other women protagonists, Sofia and Shug Avery.

Set to premiere in 2023, the film will be directed by Blitz Bazawule, who also helmed Beyoncé’s Black Is King. Marcus Gardley (The Chi) wrote the script, which Oprah says is now infused with a kind of magical realism: “We get to see and feel what’s going on in Celie’s imagination.”

As one of the perks of being a producer, Oprah got to personally deliver the casting news to Danielle Brooks, who starred in the 2015 Broadway production as Sofia. In a surprise meeting over Zoom, Brooks arrived believing she was meeting director Bazawule for a final conversation. Instead, Oprah appeared to officially tell her she’d won the part of Sofia.

“I am representing all things ‘Purple’ to tell you that you are our Sofia,” Oprah said. “I am so happy to pass whatever baton from 35, 40 years ago to you. I know you’re going to kill it.” A tearful Brooks responded, “My heart is so full. Thank you, thank you. I’m going to make you so proud.”

Oprah decided to tell Brooks the news because of the powerful impact playing Sofia had on her. “I wanted to be the one to tell you because I have such love of this character and everything she represents, everything she brought to my life. What I’m hoping is that she does the same thing for you,” Oprah said.

“It’s one of the national anthems for women’s empowerment.” —Oprah

Brooks shared how Oprah’s connection to The Color Purple has already changed her. Years ago, Oprah wrote that she had wanted the part so badly, she became “obsessed.” She started singing the hymn “I Surrender All” as a way to mentally let go—and only then, after she surrendered, did she get the call from Spielberg to come to L.A. for a final audition. Brooks, who’d heard Oprah’s story, had the word surrender tattooed on her right forearm to commemorate that lesson, which she showed to Oprah. “It only comes once you say, ‘Okay, God, I’m going to let it go,’” said Oprah. “Whatever it is for me, I know it will show up for me. And here it has shown up for you—Sofia!”

While Oprah didn’t hand-deliver casting news to every performer as she did with Brooks, she was deeply invested in choosing the perfect person for each role. Here are her thoughts on the casting choices and everything else you need to know about this next evolution of The Color Purple.

According to Warner Bros., The Color Purple will arrive in theaters on December 20, 2023. No word on whether the movie will also premiere on HBO Max, like Warner Bros.’s 2021 releases have. For now, you can stream the original movie.

The movie’s cast is star-studded—and Oprah has thoughts.

The original film adaptation of The Color Purple had a legendary ensemble cast, including Whoopi Goldberg as Celie, Danny Glover as Mister, Rae Dawn Chong as Squeak, Lawrence Fishburne as Swain, and, of course, Oprah as Sofia. The 2005 premiere of The Color Purple musical featured Broadway notables like LaChanze, Brandon Victor Dixon, and Hamilton’s Renée Elise Goldsberry. The musical’s 2015 Broadway revival was no less star-studded, with Cynthia Erivo, Jennifer Hudson, and Danielle Brooks in the lead roles.

The upcoming adaptation was a chance to assemble another memorable cast. “From day one, finding a cast that could live up to the musical has been the exciting opportunity,” Oprah says. Below, Oprah shares her thoughts on why each performer chosen is the perfect person for each role. 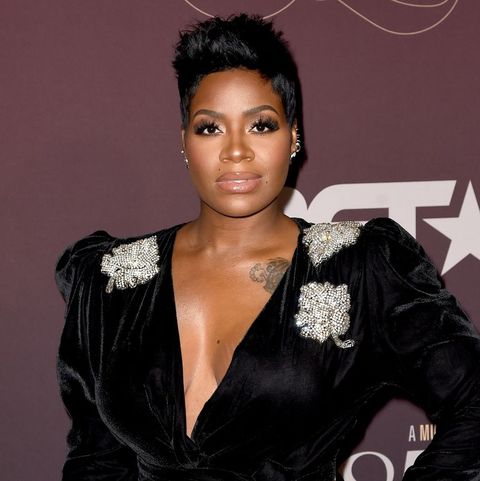 Fantasia Barrino, an acclaimed R&B singer who rose to fame on American Idol, will star in The Color Purple as Celie. “Her rawness and vulnerability, along with her singing talent, means that Fantasia is going to knock it out of the park,” Oprah says. “Celie has to show such a range of emotion, coming from what feels like no strength to really being empowered.”

Danielle Brooks, whom you may know from Orange Is the New Black, starred as Sofia—Celie’s close friend—in the Broadway adaptation of the musical. Oprah loved her performance when she saw it onstage, so the movie casting felt natural. “It was like passing the baton to Sofia,” Oprah says.

For Oprah, Shug Avery is an especially crucial character. “Shug Avery has to have a real level of pure, raw sexiness, as well as be a wisdom teacher. She’s the one that actually is the role model for Celie. Celie sees the possibilities of what a woman can be and do through Shug Avery—she’s the one who says God gets pissed if you don’t notice the color purple. She has to have some wisdom, sense, yet be sexy as hell,” Oprah says.

So, when searching for an actress to play Shug Avery, the singer who helps Celie awaken to life’s pleasures, Oprah had a very specific set of criteria. “My standard was the song in the musical that says, ‘Lock up all your husbands because Shug Avery is coming to town.’ When we were looking at actresses, I thought, Well, are you going to lock up your husband? She’s gotta be ‘Lock up your husband’ worthy. And Taraji P. Henson is indeed that,” Oprah says. 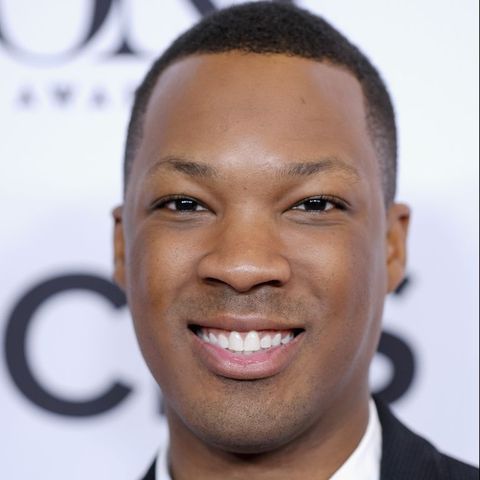 Oprah spoke to Corey Hawkins earlier this year about his role in In the Heights. When director Bazawule saw Lin Manuel Miranda’s movie musical, he immediately thought of Hawkins for the role of Harpo, who marries Sofia. “Harpo has to have a friendliness and warmth and has to convey a naïveté while also being supportive of Celie and Sophia,” Oprah says, which they thought Hawkins was a fit for. “We were all excited when he said yes.” 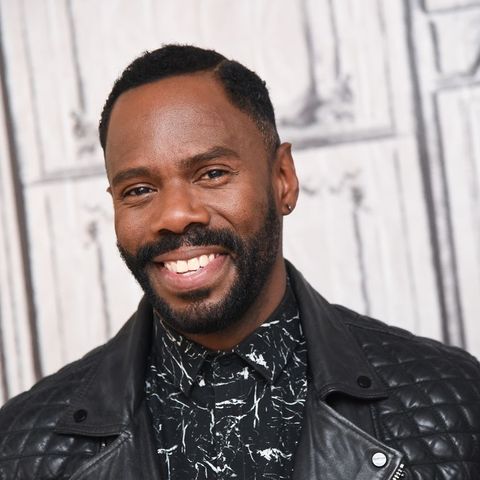 Oprah worked with Colman Domingo briefly in Selma and was looking forward to working with him again. “He always reminded me of the stature and presence of the original Mister in The Color Purple, Danny Glover. I thought, Wow, Colman could be Danny’s son,” Oprah says.

Mister is an undeniably complicated role: He is an abusive force in Celie’s life. According to Oprah, Domingo will bring new facets to the role. “He can bring a multidimensional quality to Mister, which is what we’re looking for in this version of The Color Purple. There are levels of Mister that you did not know. We’re trying to give those to him, so you don’t just see the mean side,” Oprah says.

H.E.R. is a Grammy-award-winning R&B singer making her acting debut in The Color Purple. “From the moment we approached H.E.R. about doing this role, we had our fingers crossed,” Oprah says. “We really went through some moments where we didn’t think we were going to get her because she was planning to be on tour. But she changed her schedule around to be part of this film. So it was a happy day in the Color Purple camp when we heard that H.E.R. was going to say yes and change her touring schedule to take the part.” 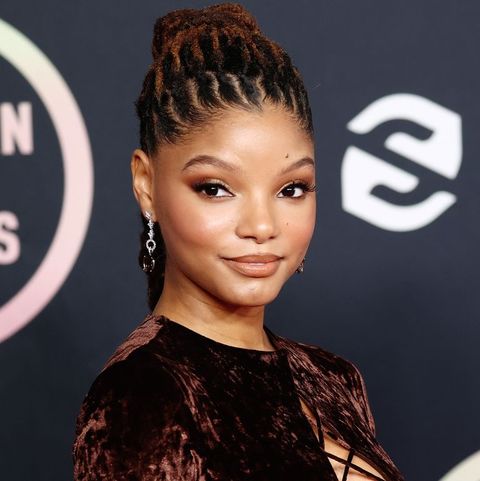 Nettie, Celie’s sister, appears mostly at the beginning of the story but has a vital role because of the siblings’ close relationship. “You have to have a kind of presence that holds the space during most of the movie when Nettie is gone and you only remember her through the letters,” Oprah says.

Halle Bailey, one half of the sister duo Chloe x Halle and star of Disney’s live-action version of The Little Mermaid, was tapped for Nettie. “We chose her for her talent and presence,” Oprah says. 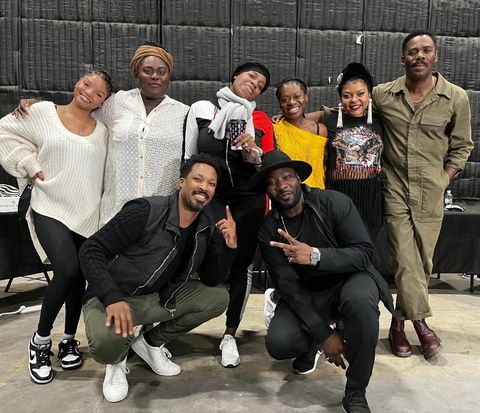 In March 2022, The Color Purple officially started filming. Director Bazawule took to Instagram to share the news along with a star-studded photo of the cast. At the same time, the film announced that a handful of new members joined the already talented group—including none other than pop icon Ciara. While Bailey will be playing the younger version of Nettie, the Grammy-winning singer has been tapped to play the adult version of the character.

After filming began, The Color Purple announced one more fabulous addition. Aunjanue Ellis is joining The Color Purple to play Mama, Celie and Nettie's mother, coming off a critically acclaimed performance as Oracene Price, Serena and Venus Williams' mother, in King Richard. For her portrayal of Price, Ellis received Oscar, Golden Globe, BAFTA, and SAG nominations. She has previous nominations from roles in When They See Us, If Beale Street Could Talk, and Lovecraft Country.

For now, you can listen to a Broadway cast recording.

Ahead of The Color Purple’s release, familiarize yourself with the movie musical’s score, with music and lyrics from the Broadway musical, written by Brenda Russell, Allee Willis, and Stephen Bray. By the time you’re finally in the theater, you’ll be fully prepared to hum along.

Listen to The Color Purple

The Story Behind the Viral Photo of KBJ's Daughter

The Most Memorable Graduation Songs

Thomas Fisher on His New Book, “The Emergency”